Testing is an important part of development, including developing web applications. Among other benefits, they increase your confidence that your web application is doing what you expect, and a provide a basis for preventing bugs in an automated way when you make changes to your code.

Since testing is such an integral part of web application maintenance and deployment, in this Part 3 of our app-deploy project we’ll put in some basic tests to see how they can be implemented in flask applications and so we will eventually see how tests fit into the deployment workflow. We’ll be using the pytest python library as our testing framework.

And then go to the appropriate location in the code with the following command which includes all of the changes made in this post:

Finally, create the python environment with:

First, a Slight Upgrade to our App

Right now, when out user enters information into the app’s simple web form, the data is simply added to the database and nothing changes from the user’s perspective. To make testing a bit more interesting, we first add a little bit of additional functionality: our app will now print out a list of all the existing names in the database on the main page.

First we add a few lines to app/app.py so that it queries the database to get all names, and then sends the list of names to the template.

Then, we update the template to print out these names.

Now, when you enter in new names, they are listed out for you, like so: 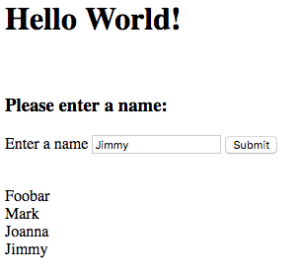 To start off, let’s activate our app’s conda environment and install pytest:

As a reminder, your top level directory should look something like this:

So, let’s add a file called test_app.py in /test.

To run your tests, you simply just have to enter ‘pytest’ in the command line as follows. No tests have been added to test_app.py yet, so when you run ‘pytest’ now, the result should look like this:

A couple of other small preliminaries to get testing set up:

The great thing about pytest is that it allows you to write tests in a very concise, pythonic way using assert statements. Suppose you have the following file which defines a function that takes the square of a number. You want to test this. Adding a couple of tests is as easy as this:

Then, you run your tests by typing `pytest` in the command line when you’re in the app’s main directory. This returns the following result (one test pass, one test fail):

Another great feature of pytest is the ability to produce “fixtures”, which provides tests with pre-initialized objects you require to run your tests. In our case, a great use of fixtures is initializing the test database or the test application instance.

Pytest fixtures have some advantages over the usual setup and teardown functions used in other testing frameworks. One is the ability to run fixtures using different “scopes”, allowing you to do the setup / teardown operation at different times when you run your test to maximize test efficiency. The options for scope here include function, class, module, and session. So, for example, a fixture in the function scope means that the fixture object is invoked once for each test function you define in pytest.

So, say all your tests need to be able to access the Flask test client application instance. Using the module fixture, the application instance is only created once at the very beginning when you run your test, rather than being created and destroyed once for every test function.

The following code creates a fixture for one database record in our Name table which will make this object available to all our tests.

As you can see, you register fixtures using the pytest.fixtures decorator. This function returns the fixture object that you want your tests to access. You access this fixture object in your tests by supplying them as an argument to the test function. The code below shows a test we can add to test_app.py that accesses the new_name fixture and ensures it has the value we expect.

Note that the part after the yield statement represents the “teardown” part of the test: this is where the application instance is removed when the tests are done running.

We also need to create a similar fixture for our database. The following code creates the database and initializes the data with create_all(), adds one Name “Mark” and then cleans up the database after the tests are complete.

Right now, when out user enters information into the app’s simple web form, the data is simply added to the database and nothing changes from the user’s perspective. To add some more interesting system tests, let’s add a little bit of additional functionality to our application: it will now print out a list of all the existing names in the database on the main page.

Finally, we add a few more tests to use all of our new fixtures, including tests to make sure our application instance exists and ensure the HTML output produced contains data we expect.

(Note that “Mark” appears on the main page since this record was added to the database as part of the fixture.)

Now, in your main app directory, you can run your tests by simply typing “pytest” in the command line. The result for our code here should look like this:

The three dots ‘…’ indicate that there were three tests and they each passed (if a test failed, one of these dots appear as an F).

Aside: during the creation of this post, I was puzzled to see that my code was running in the flask production environment, despite my configuration and environment variables clearly indicating that I was in development. Turns out there is another environment variable that needs to be set called FLASK_ENV, which defaults to “production”, turning off debug mode in Flask and throwing a warning when you run your application on the Flask development server.  To fix this, run `export FLASK_ENV=“development”` on the command line. Note that this must be set as an environment variable: adding it in config.py doesn’t work. I’ve updated this information in Part 2.  For further information in the Flask documentation, see here.

Docker is a tool for creating and managing “containers” which are like little virtual machines where you can run your code. A Docker container is like a little Linux OS, preinstalled with everything you need to run your web app, machine learning model, script, or any other code you write.

Brief Overview of How Docker Works

To give you a really high-level overview of how Docker works, first let’s define three big Docker-related terms – “Dockerfile”, “Image”, and “Container”:

To sum up these three main concepts: you write a Dockerfile to “build” the image that you need, which represents the snapshot of your system at a point in time. From this image, you can then “run” one or more containers with that image.

Here are a few other useful terms to know:

Why is Docker useful to Data Scientists?

You might be thinking “Oh god, another tool for me to learn on top of the millions of other things I have to keep on top of? Is it worth my time to learn it? Will this technology even exist in a couple years?”

I think the answer is, yes, this is definitely a worthwhile tool for you to add to your data science toolbox.

To help illustrate, here is a list of reasons for using Docker as a data scientist, many of which are discussed in Michael D’agostino’s “Docker for Data Scientists” talk as well as this Lynda course from Arthur Ulfeldt:

Here are a few examples of applications relevant to data science where you might try out with Docker:

For more inspiration, check out Civis Analytics Michaelangelo D’Agostino describe the Docker containers they use (start at the 18:08 mark). This includes containers specialized for survey processing, R shiny apps and other dashboards, Bayesian time series modeling and poll aggregation, as well as general purpose R/Python packages that have all the common packages needed for staff.

If you’re serious about starting to use Docker, I highly recommend the Lynda Course Learning Docker by Arthur Ulfeldt as a starting point. It’s well-explained and concise (only about 3 hours of video in total). I created a set of Anki flashcards from this course you can access here. I also recommend the book Docker Deep Dive by Nigel Poulton. I also created Anki flashcards from this book that you can access here.

Here are a few other useful resources you might want to check out: