One of the best skills that you can develop is the ability to find talented people before anyone else does.

This great advice from Tyler Cowen (economist and blogger at Marginal Revolution) got me thinking: What are some strategies for finding talented but underrated people?

One possible source is Twitter. For a long time, I didn’t “get” Twitter, but after following Michael Nielsen’s advice I’m officially a convert. The key is carefully selecting the list of people you follow. If you do this well, your Twitter feed becomes a constant stream of valuable information and interesting people.

If you look carefully, you can find a lot of highly underrated people on Twitter, i.e. incredibly smart people that put out valuable and interesting content, but have a smaller following that you would expect.

These are the kinds of people that are the best to follow: you get access to insights that a lot of other people are not getting (since not many people are following them), and they are more likely to respond to queries or engage in discussion (since they have a smaller following to manage).

One option for finding these people is trial and error, but I wanted to see if it’s possible to quantify how underrated people are on Twitter and automate the process for finding good people to follow.

I call this the TURI (Twitter Underrated Index), because hey, it needs a name and acronyms make things sound so official.

The index has three main components: Growth, Influence of Followers, and the Number of Followers.

Growth (G): The number of followers a user has per unit of content they have published (i.e. per tweet).

A user that is growing their Twitter following quickly suggests that they are underrated. It implies they are putting out quality content and people are starting to notice rapidly. The way I measure this is the number of followers a person acquires per Tweet.

Another possible measurement of growth is the number of followers the user has acquired per unit of time (i.e. number of followers divided by the length of time the Twitter account has existed). However, there are a couple of problems with this option:

In my opinion, the influence of a person’s following is the most important factor determining whether they are underrated on Twitter. Here’s a few reasons why:

I’m somewhat biased toward this measure because, from my own personal experience, it has worked out really well when I browse through people who are followed by influential people on my feed. If I see someone followed by Tyler Cowen, Alex Tabarrok, Russ Roberts, Patrick Collison, and Marc Andreessen, and yet they only have 5,000 followers, then I’m pretty confident that person is currently underrated.

I mulled over the possibility of using the median rather than the average, but decided against it: If someone with 1 million followers follows someone with 50 followers, I want to know more about that person, even though their TURI is high only because of that one highly influential follower. Outliers are good – we’re looking for diamonds in the rough.

Total Number of Followers (NF): The total number of followers the user currently has.

Our very definition of “underrated” in this context is when a user does not have as many followers as you expect, so total number of followers is obviously going to play an important role in TURI.

So to summarize the main idea behind TURI: if a person has a large number of “influential” followers, is growing their number of followers quickly relative to the volume of content they put out, and they still have a small number of total followers, then they are likely underrated.

For any user i, we can calculate their Twitter Underrated Index (TURI) as:

This formula has the general relationships we are looking for: high growth in users for each unit of content, highly influential followers, and a low number of total followers all push TURI upward.

We can simplify the equation by rewriting G = NF / T, where T is the total number of tweets for the user. Cancelling out some terms, this gives us our final version of the index:

In other words, our index of how under-rated a person is on twitter is given by the average number of i’s followers followers per tweet of user i.

Before calculating TURI for a group of users, there are a couple of pre-processing steps you will likely want to take to improve the results:

To test out the index, I calculated its value on a subset of 49 people that Tyler Cowen follows who have 1,000 or fewer followers (Tyler blogs at my favourite blog, inspired this project, and has good taste in people to follow).

The graph below illustrates TURI for these users (not including 4 accounts that were not accessible due to privacy settings). 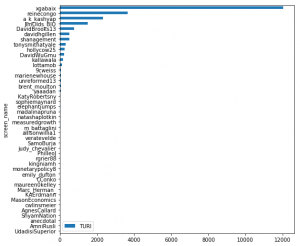 As you can see, one user (@xgabaix) is a significant outlier. Looking a bit more closely at the profile, this is Xavier Gabaix, a well known economist at Harvard University. His TURI is so high because he has several very influential followers and he has not tweeted yet.

So did TURI fail here? I don’t think so, since this is very likely someone to follow if he was actually Tweeting. However, it does seem a little strange to put someone at the top of the list that doesn’t actually have any Twitter content.

So, I filtered again for users that have published at least 20 tweets: 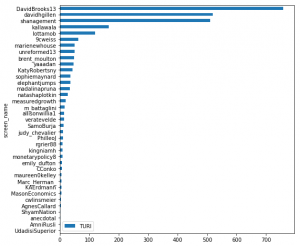 The following chart looks solely at the various user’s IF (Influence of their Followers). Interestingly, another user @shanagement has the most influential followers by far. However, they rank in third place for overall TURI since they tweet significantly more than @davidbrooks13 or @davidhgillen. 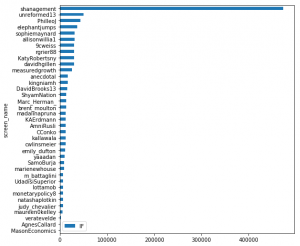 Of course, TURI has some shortcomings:

There are many many different ways you could potentially specify an index like this. Leave a comment or reach out to me on Twitter or email if you have any suggestions.

One other possible tweak is accounting for the number of people that the user follows. I notice that some Twitter users seem to have a strategy of following a huge number of people in the hopes of being followed back. In these cases, their following strategy may be the cause of their high growth and not the quality of their content. One solution is to adjust the TURI by multiplying by (Number of User’s Followers) / (Number of People the User Follows). This would penalize people that, for example, have 15,000 followers but follow 15,000 people themselves.

You can find the code I used to interact with the API and calculate TURI here. The code uses the python-twitter package, which provides a nice way of interacting with the Twitter API, abstracting away annoying details so you don’t have to deal with them (e.g. authenticating with OAuth, dealing with rate limits).

For access to my shared Anki deck and Roam Research notes knowledge base as well as regular updates on tips and ideas about spaced repetition and improving your learning productivity, join "Download Mark's Brain".